Various motor manufacturers, importers, suppliers and related entities gave their time on Nelson Mandela Day to make a difference in their communities.

A convoy of Chery vehicles transported 80 bags of personal hygiene products and an equal number of snack packs containing sweets, drinks and other treats from the automaker’s local head office in Bryanston, Johannesburg, to the organisation Save the Children in Pretoria. It was Chery’s contribution to this unique global day of philanthropy.

The donation to Save the Children was part of a national challenge to Chery dealerships to show their support for their local communities on Nelson Mandela Day. Dealers were invited to come up with unique ideas, while Chery’s head office held a collection drive.

“Nelson Mandela Day is celebrated across the world, and it is a true privilege to be able to support it in South Africa, the home of our late president, and his legacy of charity and leadership. In the run-up to Nelson Mandela Day, we asked our fast-growing network of dealers to support their own charities, and we did the same. We see it as part of our broader #WithCheryWithLove initiative, where we are actively building a community around our products,” said Bianca van Staden, Chery’s national marketing and brand manager. Sprucing up schools in the Eastern Cape

A group of more than 120 Volkswagen South Africa employees and their loved ones came together ahead of Nelson Mandela Day to make a meaningful impact in the community of KwaNobuhle in Gqeberha. Volunteers gave their time to participate in various projects at Mthonjeni Primary School as part of VWSA’s Show of Hands initiative.

The volunteers rolled up their sleeves to paint the exterior and some of the school’s classrooms, planted a water-wise garden and installed benches outside. They also packed more than 32 000 nutritious meals for local schools, early childhood development centres and NGOs.

VWSA received support from partners such as Old Mutual, which donated mobile libraries that will be used as classrooms; Rise Against Hunger, which assisted with the meal packs; and Axalta Plascon, which provided the paint needed for the project. In addition to the renovations, VWSA also took contractors to the school to perform plumbing repairs and install water tanks amid the ongoing water crisis in Nelson Mandela Bay metro. Led by Richard Fourie, managing director of Goodyear South Africa, 68 Goodyear associates refurbished a classroom and launched a legacy vegetable garden at the school. To further support the pupils, the tyre company donated four water tanks to the school. Each pupil was given a goodie bag as part of the celebrations. Mandela’s granddaughter, Ndileka Mandela, and her Thembekile Mandela Foundation partnered with Ford South Africa to donate school shoes and bags to 1 150 pupils at Clarkebury Agricultural School in the small rural Eastern Cape town of Clarkebury, approximately 32km from Qunu. At age 16, Nelson Mandela was enrolled at Clarkebury Agricultural School in 1934, before moving to Healdtown College in Fort Beaufort in 1937.

The donation for the project, including school shoes and bags, was valued at approximately R500 000. The school shoes donated to the pupils were locally designed and manufactured by Veldskoen. Last year, Ford funded the production of 4 300 pairs of hard-wearing Veldskoen school shoes, which were donated to underprivileged pupils in Pretoria and Gqeberha. Veldskoen specially developed a durable black school shoe based on its popular Heritage Shoe range. 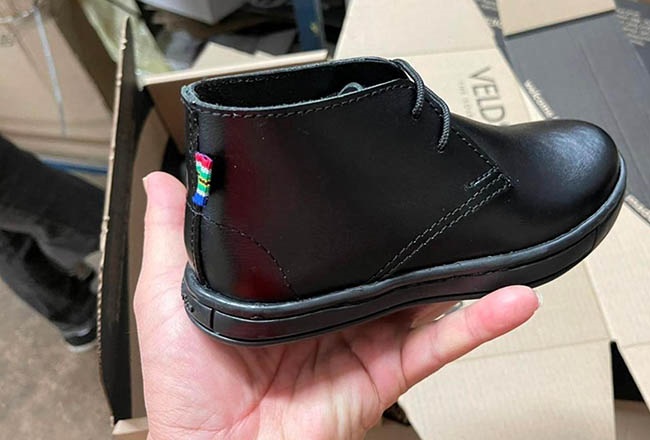 Each resident and caregiver received a much-needed blanket to add some additional warmth and comfort during the winter months. The area surrounding the home was cleaned and tidied to ensure safety, and all the windows were washed.

Dinokana Movement, a community-based group, mobilised the youth of Dinokana in North West to clean up and remove litter along a section of the N4 passing through their village.

These efforts were guided by the asset-based community development (ABCD) philosophy used by Bakwena in communities along the N4. The ABCD philosophy was aimed it empowering communities to use their resources and abilities to improve their lives.

One of Bakwena’s volunteer groups, the Bokamoso ladies in Mooinooi, handed out food parcels. Bakwena donated blankets to the elderly and assisted with cleaning up the recipients’ yards and general maintenance.