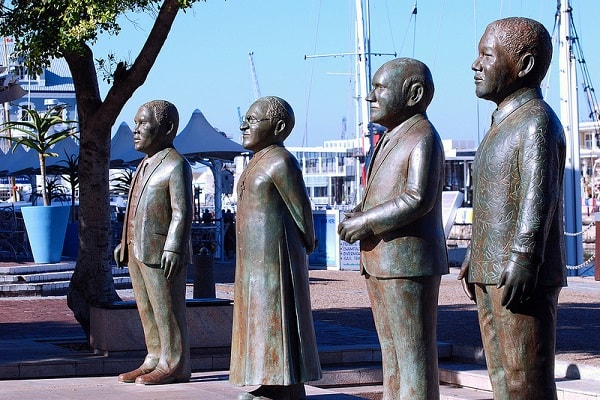 The idea to honour South Africa's four Nobel Peace Prize Laureates through sculpture was born in November 2002, during a conversation between the Premier of the Western Cape, Ebrahim Rasool, and the former Premier of the province, Marthinus van Schalkwyk.

After the Provincial Government of the Western Cape had consulted with the three surviving Laureates and the family of Nkosi Luthuli about its plans to honour the Laureates, the V&A Waterfront was approached to play host to this tribute - providing the people of and visitors to the Western Cape with an engaging and accessible place of reflection and contemplation.

The sculptures of the four Laureates stand in the form of a crescent with Table Mountain in the background, overlooking Nobel Square, located between the V&A Hotel and CD Warehouse in the V&A Waterfront.

They are slightly larger than life-size and have the Laureates' preferred quotations engraved in their chosen language in front of the sculptures. The Peace and Democracy sculpture - a narrative work acknowledging the contribution of women and children to the attainment of peace in South Africa - is slightly more to the centre of the square.

All five sculptures are cast in bronze and stand on an inner granite area of 386 square metres.

~Things To See and Do, Activities, Where to Eat, Where to Stay in Cape Town~