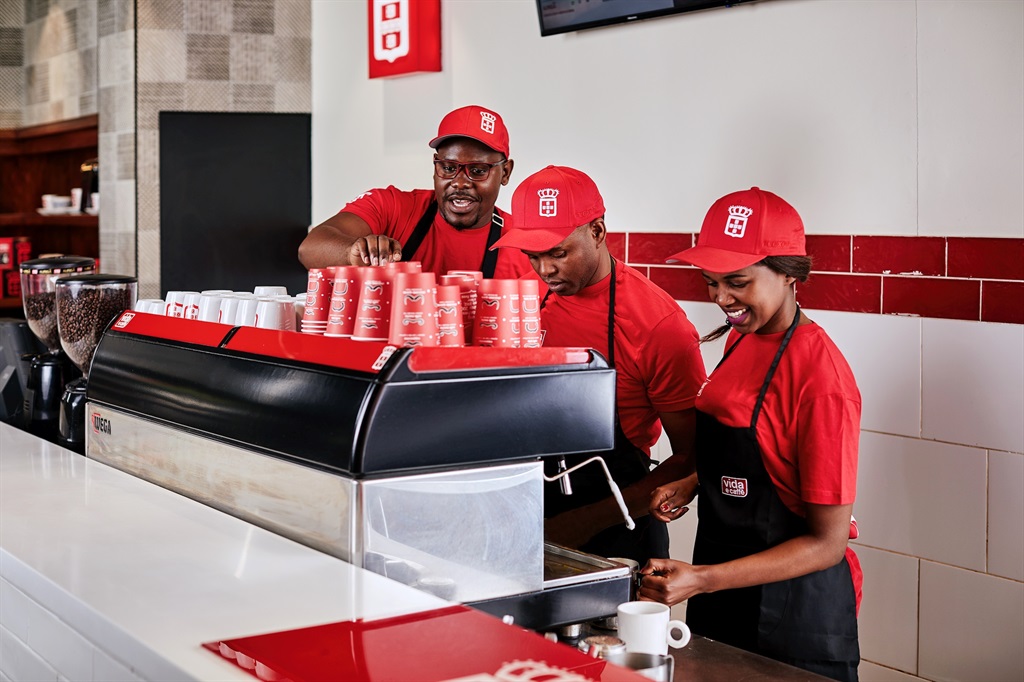 You won’t get charged for soy milk at some of the country’s franchise coffee stores and retail stores. But you’re likely to pay between R8 to R10 more for either almond, oat, soy or coconut milk depending on which the coffee shop offers.

Charging an additional charge for non-dairy alternatives is a common practice across many coffee shops and cafes not just in South Africa but also overseas. Recently non-dairy milk has been making quite the headlines in the US.

Actor James Cromwell known for his roles in Jurassic World: Fallen Kingdom, Babe and Star Trek: First Contact superglued his hands to a Starbuck’s counter during a protest against vegan milk upcharge at coffee chain stores.

In SA, the vegan milk debate hasn’t made the rounds, but Business Insider took the liberty and compared the prices of non-dairy milk per cup at some of the country’s franchise coffee stores and retail cafes.

What we found prices for vegan milk don’t vary drastically. We compared prices of oat, soy, almond and coconut milk at Vida e Caffé, WCafé, Bootleggers, The Daily Coffee, Starbucks, Kauai and The Foreign Café. Coconut milk, however, doesn’t seem to be a firm favourite alternative among coffee shops. Perhaps it could be the overpowering taste it has in a beverage.

Kauai and The Foreign Café, found in Checkers Hype retail stores charge a whooping R0.00 for all their non-dairy alternatives. Stores like WCafé, Vida e Caffe and Starbucks stores offer soy milk free but charge for their other alternatives. The highest charge is R10.00 at Bootlegger, The Daily Coffee and Starbucks. The lowest charge on vegan milk if it were free is WCafé at R8.00.

Here’s how the prices compare: 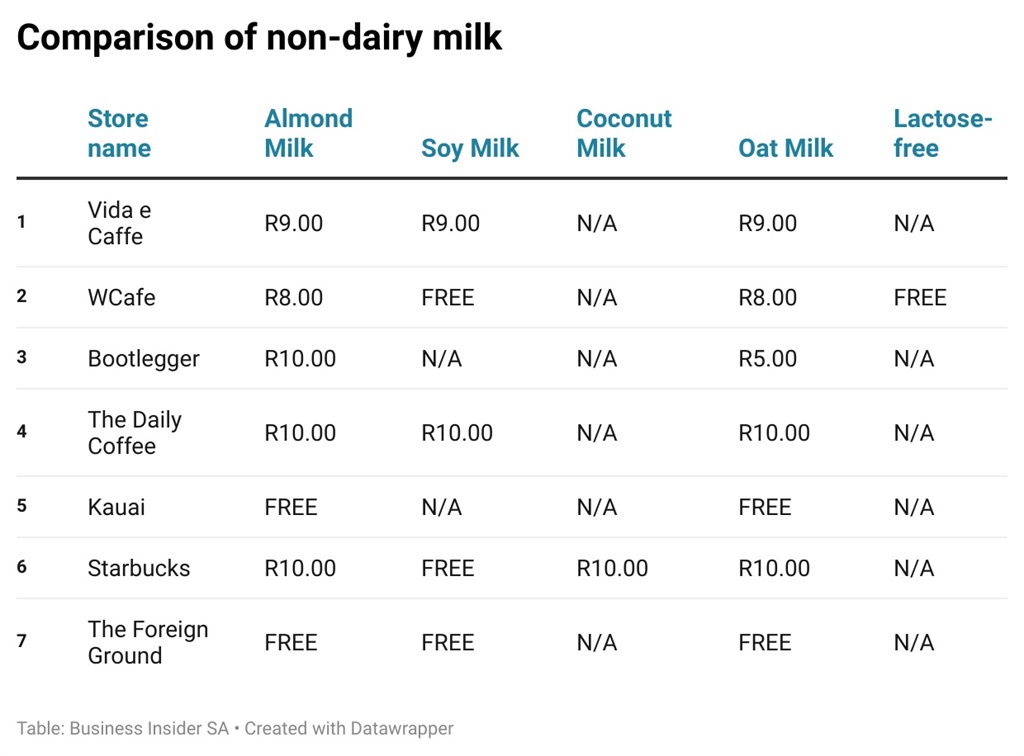 The coffee chain founded in 2001 in Cape Town is committed to finding non-dairy milk alternatives that meet their customers’ needs and are sustainable.

Currently, their soy and oat milk is free of charge, but under normal circumstances R9.00 extra per cup along with almond milk. Oat milk will be free until May 31.

“In May 2019, we were the first national coffee chain to move to a new non-dairy barista milk range for espresso-based coffee sourced from the award-winning MILKLAB,” said Casey Sher, junior brand manager at Vida.

The café named after the Foreign Ground Single Origin Coffee beans only available at Checkers has 218 cafes in Checkers and Checkers Hyper stores nationwide.

The café only offers soy, almond and oat milk. Coconut milk is not on the menu.

If you bought a beverage with vegan milk and were charged before April 2022, you were not scammed, as they recently implemented the no charge on non-dairy milk in April.

Like Foreign Ground Café, Kauai’s dairy-free alternatives are free across all stores in SA. The store offers almond and oat milk with their beverages.

Customers can take advantage of the monthly coffee subscription which gets you two coffees a day for 30 days for R149.00.

If you were to take advantage of the subscription not only, would you get free vegan milk but pay less than R2,50 for a coffee, as reported by Business Insider.

Soy and lactose-free milk are free alternatives to cow’s milk. However, they have a flat fee of R8.00 for almond and oat milk.

In comparison to other cafes and coffee shops, WCafe is the third cheapest store when it comes to charging extra for alternative milk.

The business started as a retail coffee brand in Sea Point. With oat and almond milk offerings.

The franchise store is among the stores that charge the most for almond milk at R10.00 but the best price for oat milk at R5.00.

Although it can’t compare to the free oat milk offered by Kauai and Foreign Ground Café it does offer a cheaper price than its competitors.

It is also the only shop that charges extra if you size up your beverage to an XL, this will cost you R10 on all alternative milk.

This typically small in size coffee spot has opened an additional five stores since September 2021. Now with a total of 35 stores nationally.

Found commonly in small community shopping malls and commercial zones the franchise along with Bootlegger charges the most for alternative milk.

Their almond, oat and soy milk goes for R10 per cup. Making it along with Bootlegger among the shops to charge the highest price for alternative milk.

The popular coffee franchise first arrived in South Africa in 2016.

In 2019 Rand Capital Coffee acquired the brand from Taste Holdings which at the time of selling had opened 13 stores. By the end of December 2021, the brand was well over its target of opening 30 more stores.

The American coffee shop founded in Seattle offers customers soy, almond, oat and coconut milk. Buying a beverage with soy milk at their stores is on the house whereas almond, coconut and oat is an additional charge of R10 per cup.

If you bought a beverage with vegan milk and were charged before April 2022, you were not scammed, they recently implemented the no charge on non-dairy milk in April.

Be the first to comment on "We compared the price of non-dairy alternatives at Vida, Starbucks & Kauai. There are clear winners"