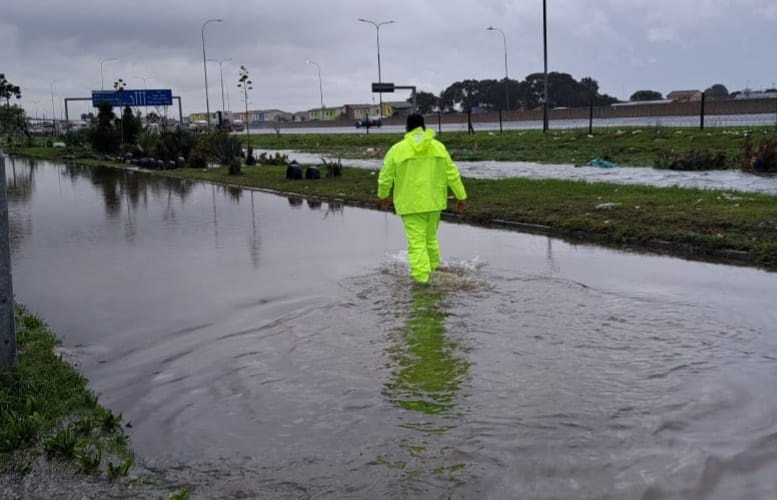 “I am so pissed off,” said Bonteheuwel’s Gale Piet as she struggled to get out of her house because of flood water above her ankles at her door.

“This has been going on for the last 10 years,” she said. “If they could just clean the drains! My paving is so damaged.”

She is one of the many Cape Town residents who did not sleep a wink watching the water ebb closer and closer to their front doors.

The City of Cape Town embarked on a massive storm drain clearing operation recently, but Piet said they were not cleaned often enough to cope with the water flow in the area. The openings were not covered with net to catch heavy items that clogged the pipes either.

“I’ve complained about it, but I am told I am a keyboard warrior.”

“This overflow found its way into a number of homes causing widespread damage to property and goods. Disaster Risk Management, as well as sewerage and stormwater officials, are on-site,” he said.

The nearby Bishop Lavis Community (BLAC) Day Care Centre had to close because healthcare workers could not get in due to flooded roads.

The facility was expected to reopen once mopping up was completed, as a safety precaution.

Bishop Lavis ward councillor Johanna Martlow said the floods even kept some children from writing their exams because they could not get to school.

The rain has really caused disruptions among many in and around the area. Most of the houses in the area have water that has started to run in. I couldn’t even go inside the residents’ homes because of the amount of water that has since flowed in.

The Western Cape Education Department said at least 10 schools in the Cape Metro closed due to flooding. The exams scheduled for Tuesday would have to be rescheduled.

These schools are situated mostly in Philippi, Macassar, Strand, Khayelitsha and Langa. “People are in a disaster. They haven’t slept and eaten. Even their groceries are full of water,” added Pimpi, appealing for food donations for the communities affected.

The Gift of the Givers braced themselves for flooding so as soon as it started, they began fanning out in Bishop Lavis, Langa, Ravensmead, Gugulethu, Mfuleni and Kraaifontein to offer humanitarian assistance. “Our teams are working around the clock to offer any assistance where possible. We also preparing to head out to Masiphumelele in Hout Bay where flooding has wreaked havoc in the area. Our call centre has been inundated with calls from residents across the mother city requesting assistance,” said Ali Sablay.

City has all hands on deck to address weather-related impact.

The City has numerous departments attending to these weather related issues, with efforts coordinated by the Disaster Risk Management Centre.

They were also providing milling and sand to raise floor levels in the informal settlements in Delft, Khayelitsha, Nomzamo, Crossroads, Philippi, Gugulethu and Nyanga.

The electricity department was attending to the weather-related power outages and the Road Infrastructure Management Department is clearing roadways and unblocking drains.

The City said an animal hospital was also affected by flooding in Kaapzicht. Cape Town rains are causing roads and drains to overflow in Monte Vista on 14 June 2022.

Many Strandfontein residents were trying to sweep water out of their yards, as the pooled rain blocked some driveways.

Vivian Paulse was standing outside, sweeping rain out of the garage because she needed to fetch her children from school.

“I can’t pull the car out because the water has now piled up. I’m afraid to take the chance to move the car because I don’t know if there are any obstructions under the water that might damage the vehicle,” she said. A flooded park in Monte Vista.

Further afield, in Paarl, a school bus transporting 51 pupils crashed in a ditch when the driver tried to swerve away from a smaller car skidding on the mud in the road. The children climbed out of the bus and did not want to go to hospital.

Preliminary data from the South African Weather Service showed that parts of the Western Cape received more than 120mm rain between Monday and Tuesday.

Kirstenbosch in Cape Town saw the highest rainfall at 124mm, closely followed by Grabouw with 122mm.

Bellville recorded around 105mm, and the central areas of the metro recorded between 81 and 90mm.