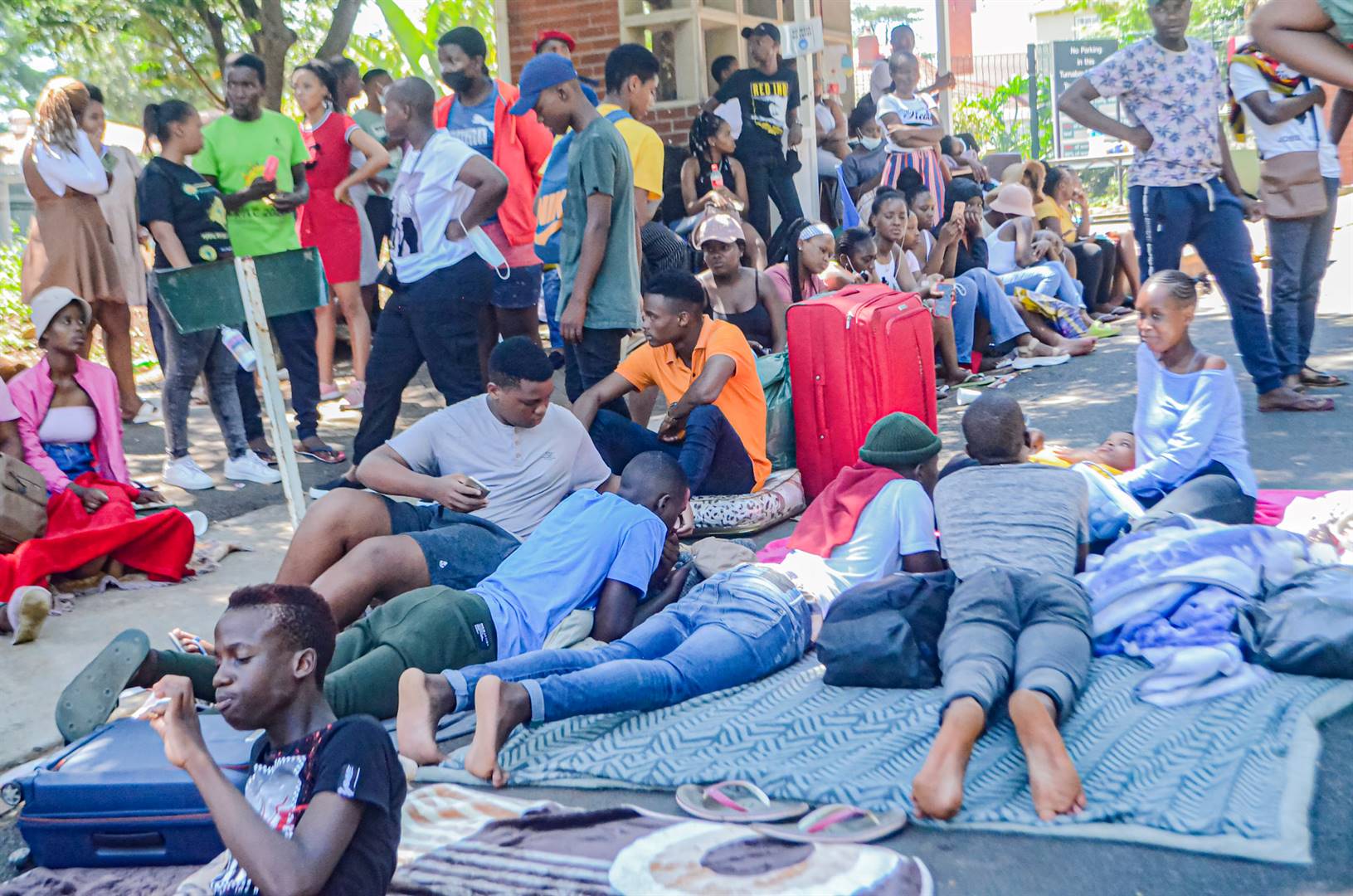 Hundreds of students from the University of KwaZulu-Natal’s Pietermaritzburg campus said they’ve been stranded for almost a month without accommodation.

Students from as far as Cape Town said they came to campus after being accepted by the university and given permission to be on campus. Students from as far as Cape Town have been struggling to get accommodation at the University of KwaZulu-Natal’s Pietermaritzburg campus. Over 200 students slept outside the university’s main gate on Wednesday as they had nowhere else to go.

On Wednesday, over 200 students slept outside the campus’ main gate after being told there was no accommodation for them.

Paulinah Lepheana, from Cape Town, said she has been in Pietermarizburg trying to find accommodation from the university for almost a month. “I was accepted and was also granted a permit to be at the campus. When I arrived, I was told there was no accommodation allocated for me and I’ve been trying to find assistance since,” said Lepheana

She added she was currently sharing a room with one of the students who had been allocated accommodation.

“I could tell she’s no longer comfortable with me around for this long and don’t blame her. I also want to give her the space she needs because it’s not her problem.”

Sithembele Xulu from Richards Bay said after receiving permits to be on campus, their understanding was that they had to be on campus to sort out their accommodation.

“We were given permits to be on campus and thought our accommodation was also sorted. I’ve been here since Friday and had to share a room with one of the students I know. I had to sleep at the main gate with others on Wednesday,” Xulu said.

He added there was nothing they could do but to continue sleeping outside campus since they did not have money to go back home.

“We are also missing out on studies and there will be tests soon,” he said.

President of the Student Command Council (SRC), Malusi Zuma, said they have been in communication with the university management about the issues faced by students.

He said the issue of accommodation was a challenge for all UKZN students.

“This is the first situation where students had to sleep outside the campus gates. There is a shortage of accommodation in Pietermaritzburg and the ones available are not enough to accommodate them all.

“We’ve been trying to place them in temporary accommodation but that’s also not a solution because when a person who has been allocated that room moves in, the first year student without accommodation will again be left stranded,” said Zuma.

He added they understood the university had financial issues.

“We are trying to find available spaces within the residences available on the campus.

“The university doesn’t want to open a new building because they said they have a deficit due to student debt. The problem is they closed a number of residences and did not replace them to be in line with their target intake.”

He said all Sasco branches will soon meet to come up with a way forward and assist all students.

UKZN said in a statement that student residence accommodation was full.

“Due to limited spaces, the university is unable to accommodate all students.

“This has been communicated to all students,” said the university’s executive director of cooperate relations, Normah Zondo.

She added students who have been allocated a place at university residences are notified via SMS and e-mail of their status.

She said the staff at the Department of Student Residence Affairs (DSRA) are working tirelessly to contact first-time entering new students who have been allocated accommodation to provide them with assistance on the processes to follow after the allocation.

Zondo said students who have not yet received official communication confirming allocation in residences are advised to consider alternative options like private accommodation.

“On Wednesday, staff members were held hostage at the Pietermaritzburg campus when approximately 100 individuals stormed the DSRA offices on campus.

“The group allegedly threatened staff members and effectively held them hostage by refusing to allow them to leave the building. Risk Management Services, working with members of the South African Police Service, managed to secure the release of the staff members from the premises after an hour,” said Zondo.

She said the incident led to the disruption in the placement of registered students at university residences and prejudiced some students as the affected staff members could not continue with their duties after the incident.

The affected staff members are receiving counselling as the incident left them traumatised.

“UKZN management is sympathetic to the plight of students but strongly condemns all actions that are meant to threaten, harass or cause harm to any member of the university community.”

Students however dismissed the allegations that they held staff members hostage. They said they were only asking them for assistance.