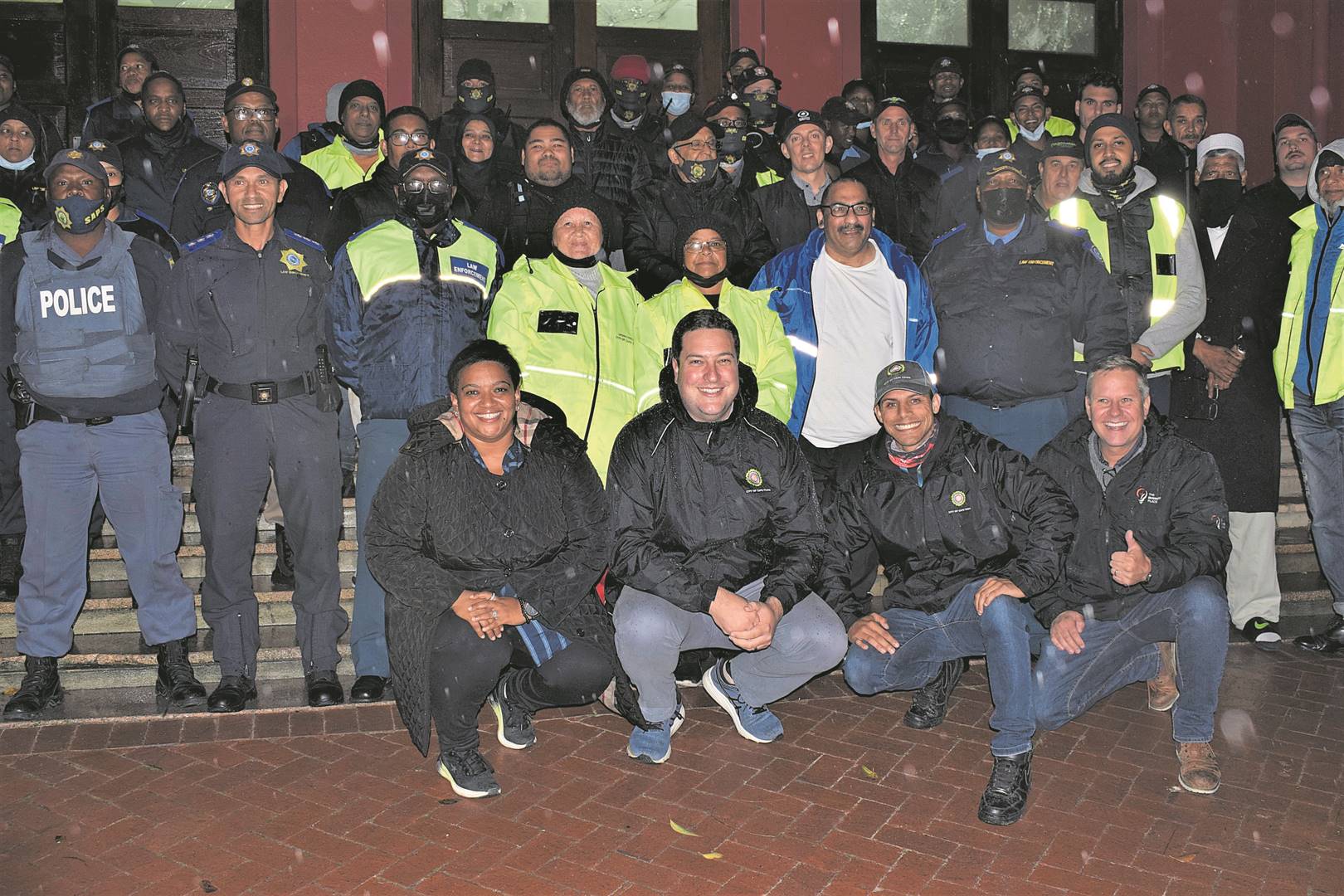 The mayor was joined by several other enforcement agencies during his foot patrol in Woodstock on Wednesday 18 May. PHOTO: CITY OF CAPE TOWN

In an effort to mitigate various crime challenges and other social issues facing Woodstock, Mayor Geordin Hill-Lewis joined several law enforcement agencies during a patrol of the area.

The foot patrol happened on Wednesday 18 May.

Patrol organiser and secretary of U Watch Rob Marshall says the area has been plagued by a spike in cable theft and other crimes in recent months.

Marshall says: “We wanted to provide the mayor with some insight into some of the safety and security challenges that exist in and around Woodstock. For the past two years, homelessness in Woodstock and the surrounding areas has ballooned. The desperation of our homeless community, which is infiltrated by criminals, has contributed to a further rise in theft.”

“Having the opportunity to show the mayor these areas and, in particular, the extensive Masekane settlement highlighted the industrial scale of cable theft and drug usage. We were able to show first-hand the use of tunnels and drains used to evade security teams, the tons of stripped cables and the entire community which has sprung up over the past 10-plus years.”

Marshall says they hope to see additional pressure being put on the Passenger Rail Agency of South Africa (Prasa) to secure their land around Masekane.

“Seeing all of our key role players out in full force demonstrated the cooperation that is needed to be an effective force against criminal activity. We are especially proud of the relationships we have built with these teams and the successes we have achieved over the past years.”

Marshall says they need more support from the City’s Human Settlements Department to provide accommodation and facilities for social housing.

“For long-term, sustainable improvements in crime levels, we need to double down on cooperation from Prasa to make their land secure, from Social Development and Human Settlements to find opportunities for those staying on these tracts of land and support them through substance abuse issues and back to society.”

Marshall says U Watch remains committed to safeguarding the community and urged residents to play their part and report all crimes.

“We trust our community will continue to support this too by saying no to criminality, continuing to invest in more CCTV cameras and taking pride in our area, making sure this is a safe place for our children to grow up.”

Allen says he is grateful to all the neighbourhood watch members, police and Metro Police officers for their unwavering commitment to creating safer communities.

“This patrol showed how the local and provincial sphere of government with the relevant crime-fighting authorities and civil society are working together to ensure greater safety in our communities.”

Allen says he has committed to at least 30 NHW’s within his first 100 days in office and says he intends to fulfil this commitment.

“I’m already gaining valuable insights about the realities that our NHW’s are facing, which will assist us in providing greater support to these amazing volunteers.”

Hill-Lewis says: “During the patrol, we saw some of the problem buildings in the Woodstock/Salt River area which are receiving attention through official processes. We also saw the large-scale cable theft that has occurred along the Salt River railway, which has little visibility by Prasa security.”

“The REU ceased to operate after a decision was made by Prasa to no longer fund their portion towards the continuation of the unit. The REU was co-funded by a partnership between Prasa, City of Cape Town and Western Cape government.”

The mayor says the City hopes that the unit can be revived to curb “chronic vandalism” of the rail network.

Marshall concludes: “We are pleased that the mayor and his team took the time to see the community through our eyes and witness the challenges and support we need.”

Be the first to comment on "Mayor joins crime walkabout"